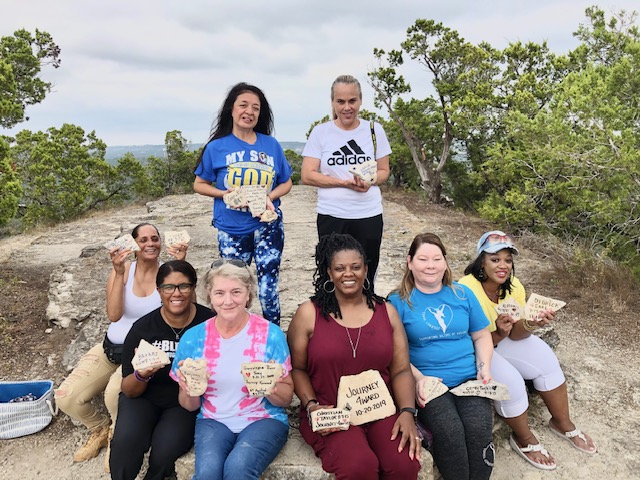 Give and you will receive.

That is what Cathy Felts-Taylor (seated, second from right) discovered after her son, Corey, had his life taken by gun violence on July 19, 2013. The tremendous loss, and her search for support, led Felts-Taylor to found Journey 4ward, a survivors group whose membership is composed mostly of other mothers who lost children to gun violence.

Based in Mansfield, Texas, in the Dallas-Fort Worth area, the organization is a place where members can find support for their ongoing pain, socialize and use their experience to help other survivors and their community.

“It’s a sense of peace because I know that I’m not in this alone,” said Felts-Taylor. “I know that there’s somebody else out there that truly gets what I’m going through and gets that I might have a bad day and gets that on my child’s birthday I may want to be by myself.”

It was solitude she sought in the initial weeks after the shooting. But Felts-Taylor then realized she needed to talk with somebody who understood the unique trauma of losing a child to violence. So she started reaching out to other mothers in her community who had lost children.

“Within three or four months I had found 10 people in my own community who were looking for support just like me,” she said.

What started with lunches and brunches has since grown into a nonprofit organization with multiple programs.

Journey 4ward offers free trauma counseling and EMDR (eye movement desensitization) therapy to crime victims. The group’s members support each other with phone calls and texts, vacation together and attend retreats. Each May four or five of the women participate in Circle of Mothers, a yearly weekend retreat created by the mother of Trayvon Martin, killed in Florida.

Members also visit middle and high schools to talk with students about the consequences of gun violence and “how it doesn’t just stop at the family. It affects the whole community — your church, your friends, your extended family,” she said.

“We also talk to them about how they can be a voice in the community just by, if they hear something that’s going to happen, speak up. Say something,” she said. “When somebody’s in danger, that’s not snitching.”

On Oct. 6, Journey 4ward’s members responded to their first school shooting, at Timberview High School in Arlington, Texas. Two people, a teacher and a student, were shot when a student opened fire inside a classroom.

Felts-Taylor and another survivor made themselves available to hundreds of parents who gathered at  the Mansfield Independent School District Center for the Performing Arts, about 5 miles from the high school, to be reunited with their kids.

The next day, Journey 4ward’s trauma counselors talked to Timberview students, especially about triggers, which can occur long after the shooting ends.

“For me, it was a learning experience because the next time — and I feel like there will be a next time — I’ll be a little bit more prepared on what to expect and what to do,” said Felts-Taylor.