Terror at the cinema retold at Fringe

The harrowing story of a mass shooting
shows the cutdown festival
still has the power to shock,
Mike Wade writes 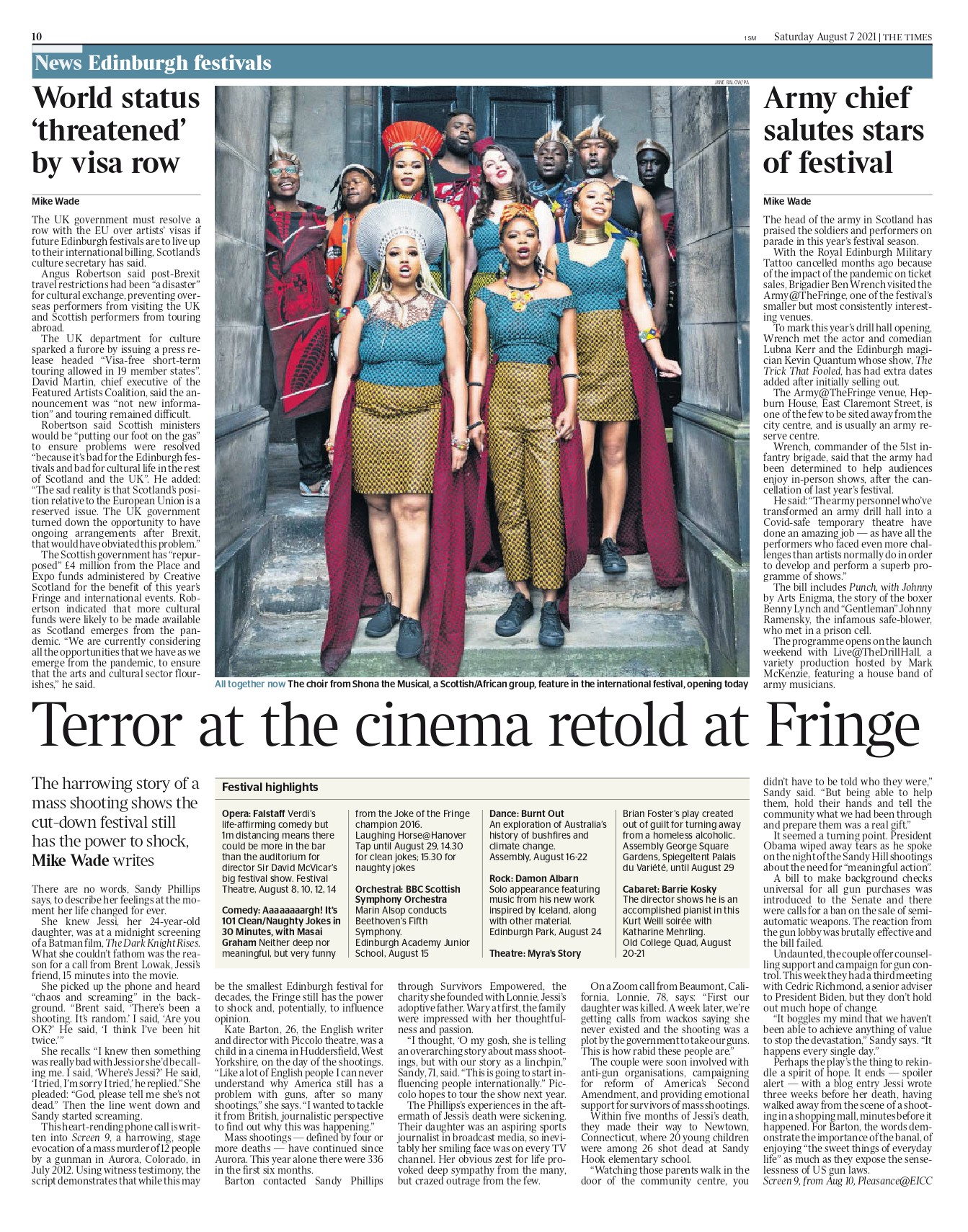 There are no words, Sandy Phillips says, to describe her feelings at the moment her life changed forever.

She knew Jessi, her 24-year-old daughter, was at a midnight screening of a Batman film, The Dark Knight Rises. What she couldn’t fathom was the reason for a call from Brent Lowak, Jessi’s friend, 15 minutes into the movie.

She picked up the phone and heard “chaos and screaming” in the background. “Brent said, ‘There’s been a shooting. It’s random.’ I said, ‘Are you OK?’ He said, ‘I think I’ve been hit twice.’ ”

She recalls: “I knew then something was really bad with Jessi or she’d be calling me. I said, ‘Where’s Jessi?’ He said, ‘I tried, I’m sorry I tried,’ he replied.” She pleaded: “God, please tell me she’s not dead.” Then the line went down and Sandy started screaming.

This heartrending phone call is written into Screen 9, a harrowing, stage evocation of a mass murder of 12 people by a gunman in Aurora, Colorado, in July 2012. Using witness testimony, the script demonstrates that while this may be the smallest Edinburgh festival for decades, the Fringe still has the power to shock and, potentially, to influence opinion.

Kate Barton, 26, the English writer and director with Piccolo theatre, was a child in a cinema in Huddersfield, West Yorkshire, on the day of the shootings. “Like a lot of English people I can never understand why America still has a problem with guns, after so many shootings,” she says. “I wanted to tackle it from British, journalistic perspective to find out why this was happening.” Mass shootings — defined by four or more deaths — have continued since Aurora. This year alone there were 336 in the first six months.

Barton contacted Sandy Phillips through Survivors Empowered, the charity she founded with Lonnie, Jessi’s adoptive father. Wary at first, the family were impressed with her thoughtful ness and passion.

“I thought, ‘O my gosh, she is telling an overarching story about mass shoot ings, but with our story as a linchpin,” Sandy, 71, said. “This is going to start influencing people internationally.” Pic colo hopes to tour the show next year.

The Phillips’s experiences in the aftermath of Jessi’s death were sickening. Their daughter was an aspiring sports journalist in broadcast media, so inevitably her smiling face was on every TV channel. Her obvious zest for life provoked deep sympathy from the many, but crazed outrage from the few.

On a Zoom call from Beaumont, California, Lonnie, 78, says: “First our daughter was killed. A week later, we’re getting calls from wackos saying she never existed and the shooting was a plot by the government to take our guns. This is how rabid these people are.”

The couple were soon involved with antigun organizations, campaigning for reform of America’s Second Amendment, and providing emotional support for survivors of mass shootings.

Within five months of Jessi’s death, they made their way to Newtown, Connecticut, where 20 young children were among 26 shot dead at Sandy Hook elementary school

“Watching those parents walk in the door of the community centre, you didn’t have to be told who they were,” Sandy said. “But being able to help them, hold their hands and tell the community what we had been through and prepare them was a real gift.”

It seemed a turning point. President Obama wiped away tears as he spoke on the night of the Sandy Hill shootings about the need for “meaningful action”.

A bill to make background checks universal for all gun purchases was introduced to the Senate and there were calls for a ban on the sale of semi-automatic weapons. The reaction from the gun lobby was brutally effective and the bill failed. Undaunted, the couple offer counsel ling support and campaign for gun control. This week they had a third meeting with Cedric Richmond, a senior adviser to President Biden, but they don’t hold out much hope of change.

“It boggles my mind that we haven’t been able to achieve anything of value to stop the devastation,” Sandy says. “It happens every single day.”

Perhaps the play’s the thing to rekindle a spirit of hope. It ends — spoiler alert — with a blog entry Jessi wrote three weeks before her death, having walked away from the scene of a shoot ing in a shopping mall, minutes before it happened. For Barton, the words demonstrate the importance of the banal, of enjoying “the sweet things of everyday life” as much as they expose the senselessness of US gun laws.