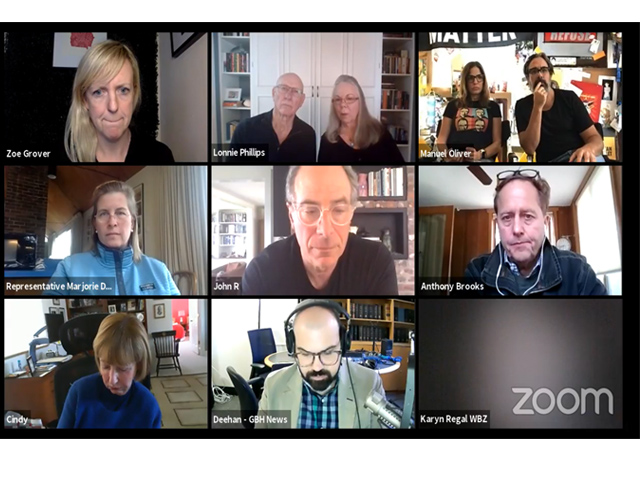 The gun was also made in Massachusetts, a state that bans the sale and possession of assault weapons within its boundaries but is home to Smith & Wesson and other gun manufacturers who export their products to other states, where they can be sold to the public.

Now, Sandy and Lonnie Phillips, Ghawi’s parents and the founders of Survivors Empowered, have joined Massachusetts legislators and gun-reform advocates in calling for the state to practice what it preaches by approving a bill that extend its bans on assault weapons to their manufacture for use by consumers.

In addition to Aurora, a Massachusetts-made assault weapon was used to kill 17 students and teachers and injure 17 others during a shooting at Marjory Stoneman Douglas High School in Parkland, Florida, on Valentine’s Day 2018. The arsenal used to kill 60 people and injure 558 people attending a county music festival in Las Vegas on Oct. 1, 2017, also included an assault rifle made in Massachusetts.

One area of the state is known as “Gun Valley” because of its concentration of gun manufacturers.

“These weapons are made in your state, but they can't be sold in your state, so in effect, Massachusetts is exporting bloodshed to the rest of the country," Sandy Phillips said at a virtual press conference alongside Massachusetts lawmakers. "There are no reasons other than the pleas of Americans for them to do anything to stop the carnage. Legislation is the only way."

Massachusetts currently prohibits the sale, transfer or possession of assault-style weapons and large capacity magazines holding 10 or more rounds. The legislation, introduced on April 20, would also ban the manufacture of assault weapons and large-capacity magazines, except for sales to police agencies and the military. Violators would face fines ranging from $1,000 to $1 million and prison sentences between one and 10 years.

Assault weapons “are designed for the sole purpose of efficiently killing many people at once,” said State Rep. Marjorie Decker, one of the bill’s co-sponsors. To Decker, the math is simple: fewer assault weapons means fewer mass shootings like those in Aurora, Parkland and Las Vegas.

“We must decide what we value more — the freedom to live without fear of being shot in a mass shooting, or the ‘freedom’ to allow the manufacture of military-style weapons in our name, in our state,” she said. “We don’t allow these assault weapons to be made and sold here in Massachusetts to private citizens, so why should they be sold in other states to private citizens?”

Smith & Wesson, which is based in Springfield, Massachusetts, reported record net sales for the quarter that ended Jan. 31. Revenue from handguns and long guns more than doubled for the nine-month period ending on that date.

The company reported shipping 407,000 long guns for the nine-month periods, more than double the 189,000 shipped during the same period in 2020. About 95 percent of the long guns that were shipped went to the consumer market.

Other gun manufacturers are based in Massachusetts, including Kahr Arms and Savage Arms and Troy Defense.

John Rosenthal, the founder of Stop Handgun Violence and an advocate for gun reform in Massachusetts, said the state’s assault weapons ban has led to “the lowest gun death rate and lowest cost of gun violence” in the U.S.

“But our duty extends beyond our state borders,” he said. “If these weapons of war can’t be owned here, why should they be able to be made here and then used to massacre people in other states?”