An Interview With John Rosenthal, co-founder of Stop Handgun Violence 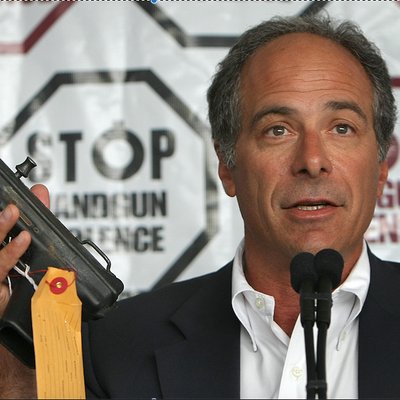 John Rosenthal is not only a gun owner and businessman, but also a veteran activist who protested against nuclear weapons and founded a nonprofit to aid homeless people in Boston. So when he and the late Michael Kennedy, nephew of the late President John F. Kennedy and son of the late Attorney General Bobby Kennedy, teamed to buy a parking garage overlooking the busy Massachusetts Turnpike in 1991, they decided to erect a billboard promoting gun violence prevention.

With support from friends like the singers Jackson Browne and Bonnie Raitt, they installed a 250-foot-long array of pictures of young people whose lives were taken by gun violence. The billboard garnered a lot of attention, not just from drivers on the turnpike, but from local newspapers, the New York Times and state and national elected officials, including President Bill Clinton.

Three years later, Rosenthal and Kennedy co-founded the Beverly, Massachusetts-based organization Stop Handgun Violence to advocate for gun reform in the state. The organization achieved, in 1998, its first victory — a landmark gun safety bill signed into law by Republican Gov. Paul Cellucci. The bill established a renewable licensing system for firearms, as with cars; permanent bans on assault weapons and large-capacity magazines; requirements for the safe storage of guns; and other provisions. Subsequent reform bills were passed in 2004, 2014 and 2018, and now Stop Handgun Violence is pushing a bill that would ban the manufacture of assault weapons in the state, which is home to numerous gun companies.

In this interview, he discusses the organization’s history, how it achieved legislative successes and the prospects of a permanent ban on assault weapons at the federal level. His answers have been condensed and edited for clarity.

Why did you and Michael take up the cause of gun violence?

As Michael and I were thinking about what issue we could address, someone told me that out of 106 Americans that died every day [from gun violence] in 1994, 15 were kids under 19 years old. So I started to research that and realized that it’s really gun violence by design — these are inherently dangerous products that are made for killing and unlike toy guns and teddy bears that have a multitude of federal regulations on how they’re made, the real firearm that was resulting in 40,000 deaths a year had no regulations.

In fact, Congress prohibited the National Consumer Product Safety Commission from regulating real guns. It made no sense. Nothing seemed like a more pressing and obvious and solvable bad public policy than allowing unrestricted access to all firearms, including military-style weapons, without detection by law enforcement.

How did the billboard lead to successful reform legislation?

It not only ended up in the New York Times, but President Clinton told me he would change his entourage route when he came to Boston to see the billboard. It became a national icon. It also became a front-page headline for every local official in Massachusetts. Locally it had a huge impact. So, you couldn’t be ignored.

Being able to walk into any legislator’s office in Massachusetts, Democrat or Republican, with the Kennedy last name made a big difference. The secret sauce, the unique thing that we did right out of the gate, I was a gun owner and that changed the whole debate: to have an activist business person and gun owner, and a Kennedy, in Massachusetts saying we want to reduce preventable injuries and deaths from firearms without banning most guns. And you can’t leave that second part out. Leaving that second part out is what the NRA does with their misrepresentation of the Second Amendment.

What have been your successes?

We banned military-style assault weapons, large-capacity ammunition magazines greater than 10 rounds, which police in some cases don’t even carry, and cheap Saturday Night Specials — unregulated firearms with no safety features or minimum barrel length. We became the first state in the nation in 1998 to regulate guns like every other consumer product. And we’ve proven the NRA’s worst nightmare: that gun laws save lives without banning most guns. Massachusetts makes it simply harder for people who shouldn’t get guns to get guns, and that results in fewer guns and that results in less gun violence — less suicides, less homicides.

What role can business people play?

Are you worried about the U.S. Supreme Court’s review of concealed carry laws?

I’m worried about that case, and given the makeup of the court I wouldn’t be surprised if that case is overturned. But I don’t think that it’s going to change a lot, personally, because guns are virtually unregulated in 32 states now. Anyone can carry anything for any reason. And we have over 40,000 gun deaths a year, and a mass shooting of four or more people every day, and I’m afraid that’s not going to change until there [are] national reform laws like we have in Massachusetts.

Will Congress ever find the will to pass a national assault weapons ban?

I knew there wouldn’t be after Sandy Hook; I knew there wouldn’t be after Parkland or Virginia Tech or Aurora. But Las Vegas: 58 dead in minutes, and it didn’t even get the attention of Congress. Will there be an assault weapons ban: Only if the president and vice president stick with it and only if the filibuster is changed so a simple majority can pass it. Then you get a background check requirement, you get an assault-weapon ban, you get some reasonable restrictions. Of the 40,000 average annual gun deaths a year, 27,000 of those lives would be saved if every state simply had the same low gun deaths per 100,000 population as Massachusetts.

What can others do to replicate your success?

First, you’ve got to make yourself aware of the issue and what the potential solutions are, without banning most guns because if you start talking about banning guns, people are going to glaze over. I think you’ve got to come up with a message around, we want to reduce preventable injuries and deaths without banning most guns, here’s how it’s done; here’s an urban state that did it. I would say get involved in a local organization, get informed and hound members of Congress in every district in America to do the right thing,