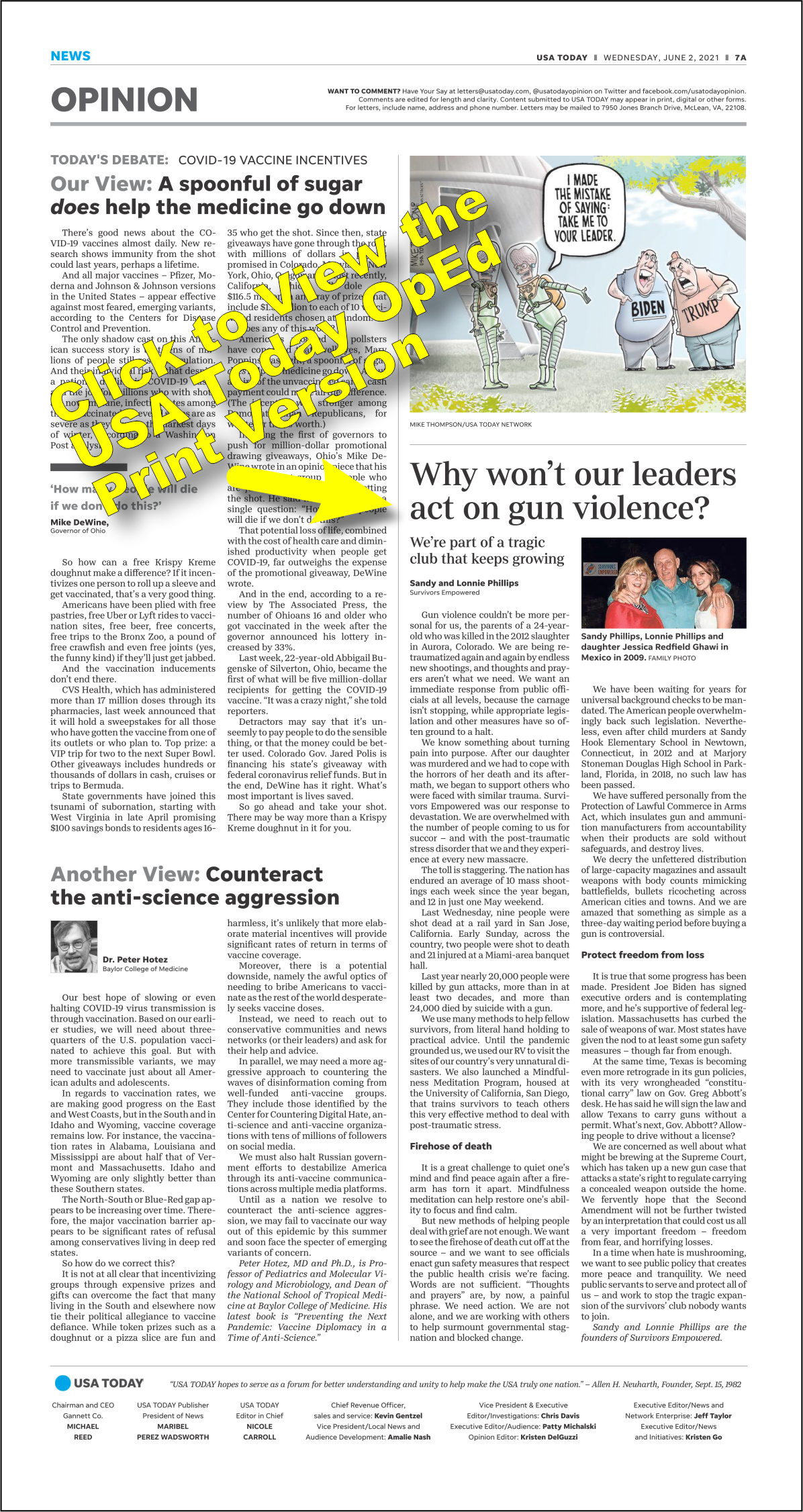 Our 'thoughts and prayers’ are for
government action on gun violence:
Bereaved parents

We are members of a tragic club that keeps growing.
Public officials should be trying to prevent shootings
like San Jose and Miami, not fueling them.

Gun violence couldn’t be more personal for us, the parents of a 24-year-old who was killed in the 2012 slaughter in Aurora, Colorado. We are being retraumatized again and again by endless new shootings, and thoughts and prayers aren’t what we need. We want an immediate response from public officials at all levels, because the carnage isn’t stopping, while appropriate legislation and other measures have so often ground to a halt.

We know something about turning pain into purpose. After our daughter was murdered and we had to cope with the horrors of her death and its aftermath, we began to support others who were faced with similar trauma. Survivors Empowered was our response to devastation. We are overwhelmed with the number of people coming to us for succor – and with the post-traumatic stress disorder that we and they experience at every new massacre.

The toll is staggering. The nation has endured an average of 10 mass shootings each week since the year began, and 12 in just one May weekend.

Last Wednesday, nine people were shot dead at a rail yard in San Jose, California. Early Sunday, across the country,two people were shot to death and 21 injured at a Miami-area banquet hall.

Last year nearly 20,000 people were killed by gun attacks, more than in at least two decades, and more than 24,000 died by suicide with a gun.

We use many methods to help fellow survivors, from literal hand holding to practical advice. Until the pandemic grounded us, we used our RV to visit the sites of our country’s very unnatural disasters. We also launched a 2021-06-usa-today-oped.pdfMindfulness Meditation Program, housed at the University of California, San Diego, that trains survivors to teach others this very effective method to deal with post-traumatic stress. It is a great challenge to quiet one’s mind and find peace again after a firearm has torn it apart. Mindfulness meditation can help restore one’s ability to focus and find calm.

But new methods of helping people deal with grief are not enough. We want to see the firehose of death cut off at the source – and we want to see officials enact gun safety measures that will respect the public health crisis we’re facing. Words are not sufficient. “Thoughts and prayers” are, by now, a painful phrase. We need action. We are not alone, and we are working with others in partnership to help surmount governmental stagnation and blocked change.

After San Jose Shooting: Confirm new ATF chief to police the gun industry and save lives

We have been waiting for years for universal background checks to be mandated. The American people overwhelmingly back such legislation. Nevertheless, even after child murders atSandy Hook Elementary School in Newtown, Connecticut, in 2012 and Marjory Stoneman Douglas High School in Parkland, Florida, in 2018, no such law has been passed.

We have suffered personally from the Protection of Lawful Commerce in Arms Act, which insulates gun and ammunition manufacturers from accountability when their products are sold without safeguards, and destroy lives. We decry the unfettered distribution of large-capacity magazines and assault weapons with body counts mimicking battlefields, bullets ricocheting across American cities and towns. And we are amazed that something as simple as a three-day waiting period before buying a gun is controversial.

It is true that some progress has been made. President Joe Biden has signed executive orders and is contemplating more, and he's supportive of federal legislation. Massachusetts has curbed the sale of weapons of war. Most states have given the nod to at least some gun safety measures – though far from enough.

At the same time, Texas is becoming even more retrograde in its gun policies, with its very wrongheaded “constitutional carry” law on Gov. Greg Abbott's desk. He has said he will sign the law and allow Texans to carry guns without a permit. What’s next, Gov. Abbott? Allowing people to drive without a license?

The Backstory: We've been tracking mass killings since 2006. Most happen at home.

We are concerned as well about what might be brewing at the Supreme Court, which has taken up a new gun case that attacks a state’s right to regulate carrying a concealed weapon outside the home. We fervently hope that the Second Amendment will not be further twisted by an interpretation that could cost us all a very important freedom – freedom from fear, and horrifying losses.

In a time when hate is mushrooming, we want to see public policy that creates more peace and tranquility. We need public servants to serve and protect all of us – and work to stop the tragic expansion of the survivors’ club nobody wants to join.